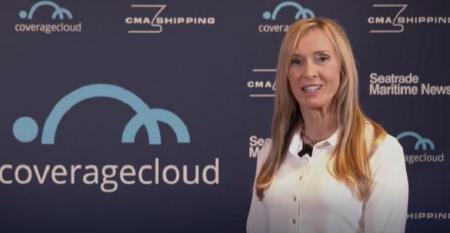 Freedom Ballast launches in the Americas market
Apr 18, 2022
Seatrade Maritime News caught up with Bill Burroughs, CEO of Freedom Ballast as he celebrated his company’s...

Lawyer drumming up support for #Rock4Ukraine
Apr 18, 2022
During CMA Shipping, the Seatrade Maritime News team heard of an incredible endeavour to raise funds for Ukraine...

In conversation with Dorothea Ioannou incoming CEO of the American P&I Club
Apr 14, 2022
Dorothea Ioannou is set become the first ever woman leader of a P&I Club at the beginning of August. She talks about the new role and P&I market in an exclusive interview with Seatrade Maritime News.

CMA Commodores: Integrity and empowerment key to leadership
Apr 01, 2022
Leaders of prominent maritime companies explained their views on the most imporant aspects of modern business leadership at the climax of CMA Shipping 2022.

Nautilus Labs optimistic after Microsoft joins Series B funding
Mar 31, 2022
A week on from its announcement that it raised US$34m in Series B funding, Seatrade Maritime News caught up with Ross Millard...

Global bunker market flipped on its head by Ukraine war
Mar 31, 2022
The invasion of Ukraine has turned bunker markets on their head as sanctions hit Russian oil exports.

CMA: Agile and non-prescriptive is the name of the game in Class
Mar 30, 2022
Hear the priorities and strategies at play in ABS in a lightning round-up of the class society's current work.

CMA: ‘Perfect time’ for digital productivity tools in maritime
Mar 30, 2022
There could not be a more perfect time for communications tools to help undperpin the maritime industry, according to SEDNA.