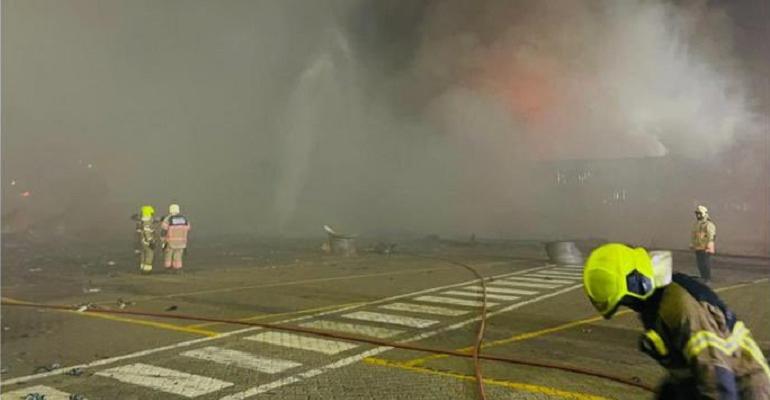 Dubai Misdemeanour Court gave five men, the vessel’s Indian captain and four Pakistanis owning and representing shipping, trading and cargo companies, suspended sentences of one month, and fined each man AED100,000 ($27,200), for their role in an explosion on 7 July last year that could be heard 25km away.

It was found that they failed to carry out the correct safety procedures, when a container with 640 barrels of organic peroxide type C was left on the quay in the hot sun, Abu Dhabi-based English-language daily The National reported. Other containers with similar contents were also apparently involved in the incident.

The hazardous containers arrived onboard the Ocean Trader at Dubai’s Jebel Ali Port on 27 June from China, and were stored over an 11-day period, causing the contents of the barrels to heat up and spontaneously combust as they were being moved onto a vessel for further transit. During the transfer of the containers to the vessel, gas leaked from the barrels into the container, resulting in an explosive mixture, the court heard.

“The court found that organic compounds were allowed to decompose, which was a direct result of negligence by the cargo shipping company,” the publication said. “Decomposition led to an exothermic reaction and pressure from fumes built up, according to expert testimony to the court.”

The 1993-built Ocean Trader is owned by Sash Shipping based in Dubai according to the Equasis database and the vessel’s current status as in casualty or repair.

A government statement issued on July 8, 2021, the day after the original incident, said that casualties were avoided due to the “quick action of Jebel Ali Port’s officials who ordered an evacuation of the vessel and the immediate area when a leakage and smoke was seen.”

“Following the fire, Dubai Civil Defense, Jebel Ali Port, Dubai Police and other relevant authorities also took immediate measures to ensure operations across the Port, including Terminal 1 where the incident took place, continued normally without any interruption,” it said.

Despite the original claim that there were no injuries in the explosion, The National said Dubai Public Prosecution charged the five men, as well as five companies, with wrongfully causing the incident and subsequent damage, as well as the injury of five men. The companies were also fined $27,200.